FAME!! (and Two Rather Large Balloons)

0
‘Thirteen’ will Hit the Online Shelves for Anti-Slavery Day!
13 October 2016
Next

0
These Lyrics and Bible Verses will Transform How You See Change this Autumn
03 November 2016
October 28, 2016 by April in Publicity

A venture into new territory this week left me with a couple of cool souvenirs.

Those being; fame, and two rather large balloons.

I got in the local papers this week with the pre-order launch of Thirteen, and it’s all gone to my head a bit. Here’s how it all happened.

On Anti-Slavery Day, charity single Thirteen launched for pre-order. I told loads of people, organisations and press about this powerful song I had co-written, and loads and loads of people showed absolutely incredible support.

The following day I had the most amazing chat with Rebecca from the Hereford Times, who had picked up a tweet I sent and gave me a call to find out more about the song. We talked about the message of the song, the £49.84 already raised in pre-orders (£68 today!) and even about how I became a Christian. We arranged for a photo to be taken on Saturday, which I would have to attend alone as co-writer Amy wouldn’t be free.

I spent the rest of the day feeling excited and a little bit chuffed that somebody actually read my tweet.

When it came to the photo on Saturday, super-husband Nathan picked up two silver balloons to use as props (which turned out to be half the size of me) and we smiled for lovely cameraman James.

Later in the week, I was very pleased to take the enormous balloons out of my tiny flat again, this time for a feature in the Ross Gazette. Catherine was shocked to hear that girls as young as 13 – and even younger – are caught in sex-trafficking in the UK, and wished us both the best of luck with the song.

Now, I’ve worked for a charity for 5 years; I’ve stood for many a press photo and have the routine perfected.

Step 1 – smile your biggest, broadest smile and pretend you think you look great. Step 2 – once the paper is out, scour the back pages for your piece among the scattering of charity events and cheque presentations, usually buried next to the obituaries. Step 3 – if you’ve been featured, and if your photo has been included, cut your 3 x 4cm article out proudly and send it to your mum.

But that’s not the best part.

And this is why I'm definitely famous now

As a veteran of this procedure, the shoppers and staff of Spar in Ross may have been unsurprised to see me sprawled on the floor by the newspaper rack yesterday, spooling through the back pages of the Hereford Times for what felt like an embarrassingly long time.

The article wasn’t there. Ah well, I thought as I continued spooling towards the more exciting ‘first half’ articles, maybe next week. My thumb stopped on the inside cover page and I let out a muffled shriek. There I was – half a spread of my face and two huge “1” and “3” balloons  – right behind the front page. 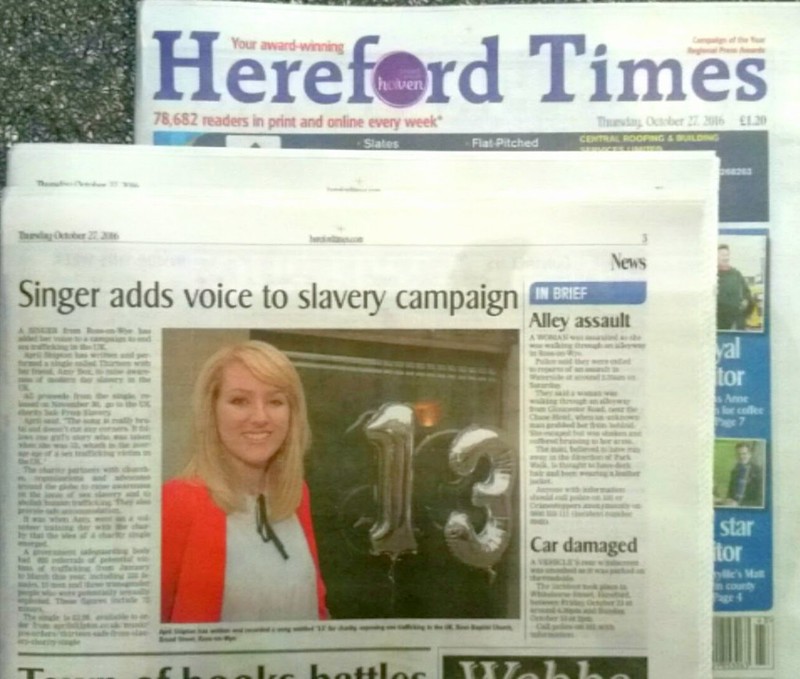 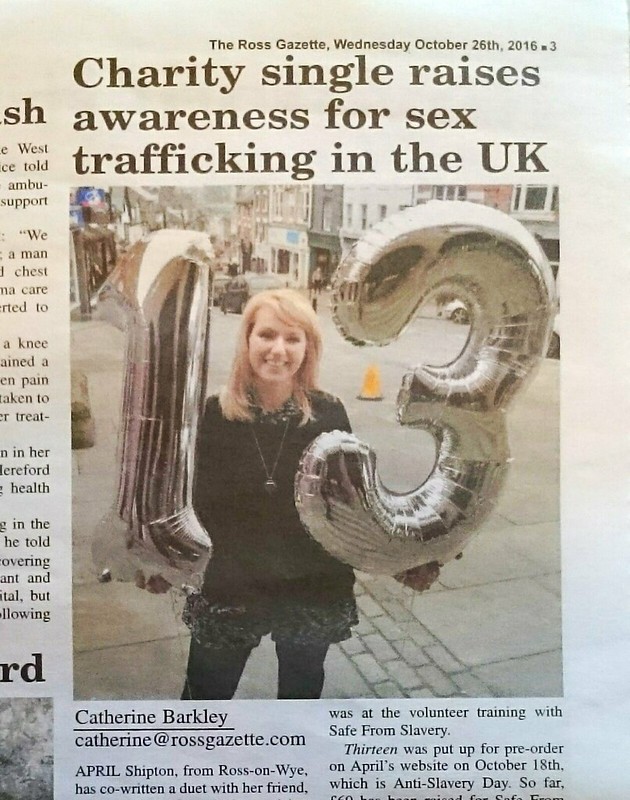 This isn’t how this usually goes. Out of the 136 pages of this substantial county paper (that boasts 78,682 weekly readers), I’d have been pleased to be placed somewhere between properties and sport. Turning to the Ross Gazette, with its more modest 24 pages, I grinned as I appeared just behind the cover again.

The exposure is an incredibly exciting opportunity (I’ve been told the article also features in the Ledbury Reporter and Halesowen News, though I have yet to see this with my own eyes!). If even just one person pre-ordered Thirteen as a result of spotting any of these fantastic articles, then what a huge success. Imagine if all 78,682 HT readers were moved to buy the song! The resulting donation to Safe From Slavery would amount to almost a quarter of a million pounds.

The £68 actually raised over this last week is, nonetheless, a huge encouragement to Amy and I, but especially to the staff and beneficiaries of Safe From Slavery. When I spoke to the founder about all this, the gratitude was tangible in her voice.

And left me with two rather large balloons.